Dimitri’s work stems from a long tradition of using distinct dots of color in art, which the viewer’s mind blends together to create the final image. Playing with chromatic tonality and the dissection of visual planes, Dimitri creates works that seem to move and undulate within the canvas as if attempting to escape their two dimensional confines. While the dots work together in harmony to create the image, their circular nature acts in opposition to his square or rectangular canvases, reminding us of the basic elements of life and how atoms are in a constant movement – propelling against each other – creating matter itself. Having studied the works of the original Pointillist masters, such as Georges Seurat and Henr Edmond-Cross, as well as pop artists like Roy Lichtenstein and Keith Haring, Likissas gives us a fresh interpretation on the usage of dots in painting. While having been painting and experimenting with dots and color for over 20 years, his body of work has maintained the same technical and stylistic approach over all these years while the content has developed as he has moved through different countries and life events. Dimitri Likissas (1969) was born and raised in Belgium and has Greek roots. Around his early 20’s he moved to the Caribbean where his career evolved from being a graphic designer to a corporate director of a media publishing company. From that point forward he has turned into a full time artist and painter and his creations have discovered their way into numerous private collections mostly in Europe and America. His colored dot arrangements transform imagery into abstract / geometric forms. He explores the unlimited potential of chromatic and tonal scale, visual planes and volume with a two-dimensional framework. Viewing his dynamic works of art is an exciting optical experience. He is influenced by his pop art heroes Keith Haring (who he has personally met as a teen), Roy Lichtenstein and Andy Warhol. He has evolved from his earlier style which included a same single colored dot pattern with a superimposed subject, while today, the main element or subject coalesces within the pattern of labor-intensive, individually colored dots. For him, the pattern of dots serve as references to living organisms, atoms, i.e. the idea that matter is made up of discrete units. These patterned dots cohabitate in harmony. Many ask him “Why dots and not squares?” For Dimitri, dots (circles) keep moving and rolling, while squares are restrictive.His pictographic arrangement seems to emerge ahead of our vision boundaries. As the colored spots matrix progress and retreat, undulate and combine, they imitate the way in which the universe works, in the lively sphere of both the micro and macrocosms. Dimitri pursues color relationships and brings a considerable dexterity of color theory, a deep-seated sense of rhythm and formational aspects to each painting. His wish is to take his art observers on imaginary journeys as they wander and unravel the optical effects of his paintings. He says, “I hope that my art invites observation and lets viewers have visual discoveries.” 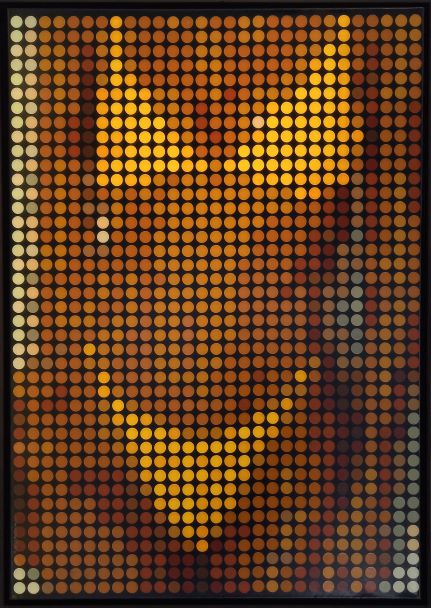 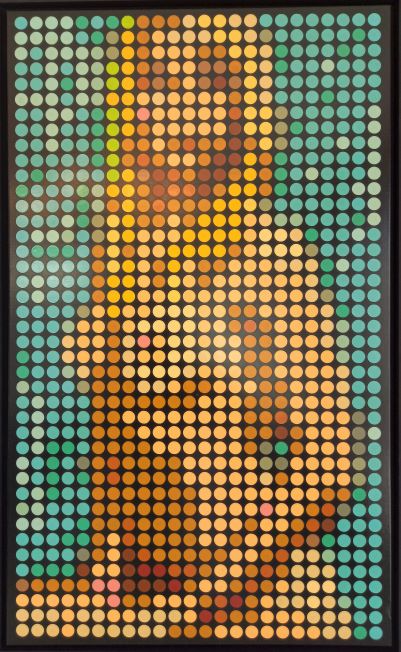